“Houston, we have an Astronaut-ahem- a Snowman!

I would be willing to bet that an Astronaut Snowman is something you never thought you needed to create but if you have a space loving kid or Astrophysicist friend or maybe a fan of the show, Big Bang Theory.…..and Howard is your favorite character , well you get the point.

I bought this ornament at Michael’s and it reminded me of an Astronaut helmet.

See it? Or am I crazy? Well, probably YES to  both questions. 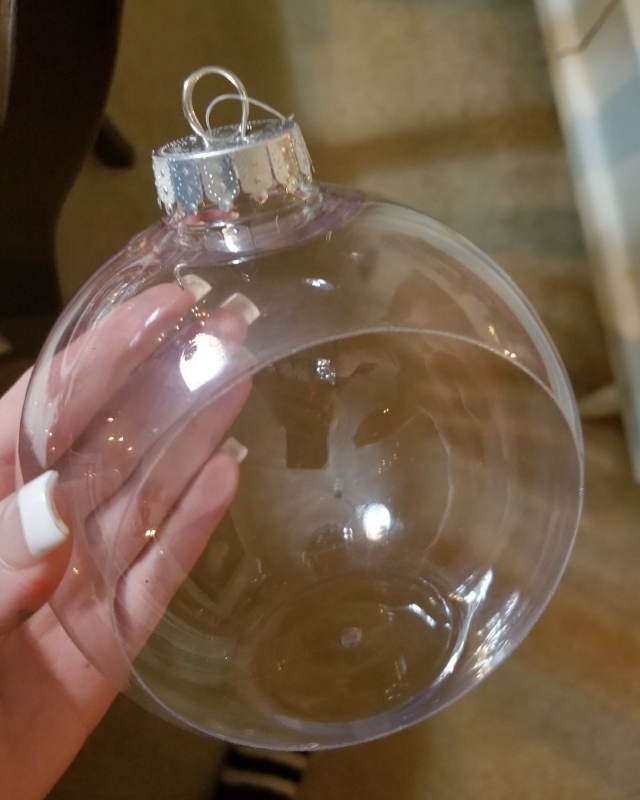 There are so many things to make with these ornaments.

I also had 2 glass bowls from The Dollar Tree and fake snow to go in them. Stack them up and you get a snowman. 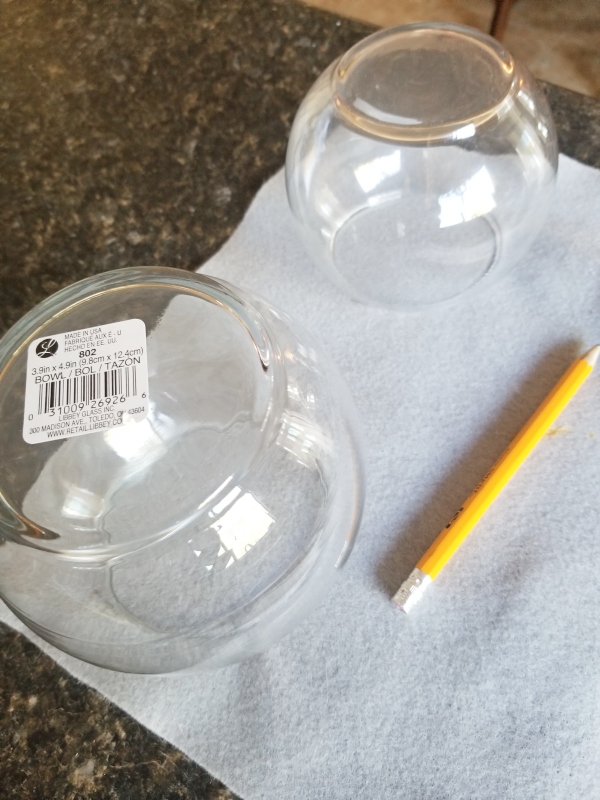 I cut out felt to cover them and keep in the snow. 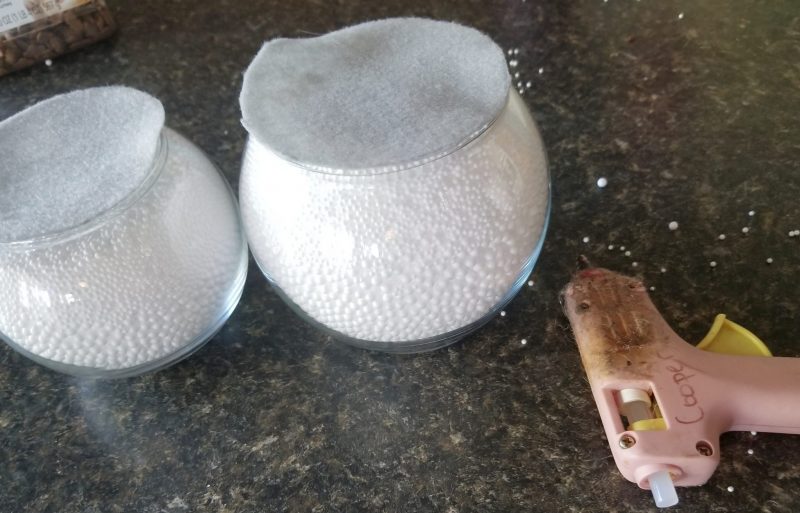 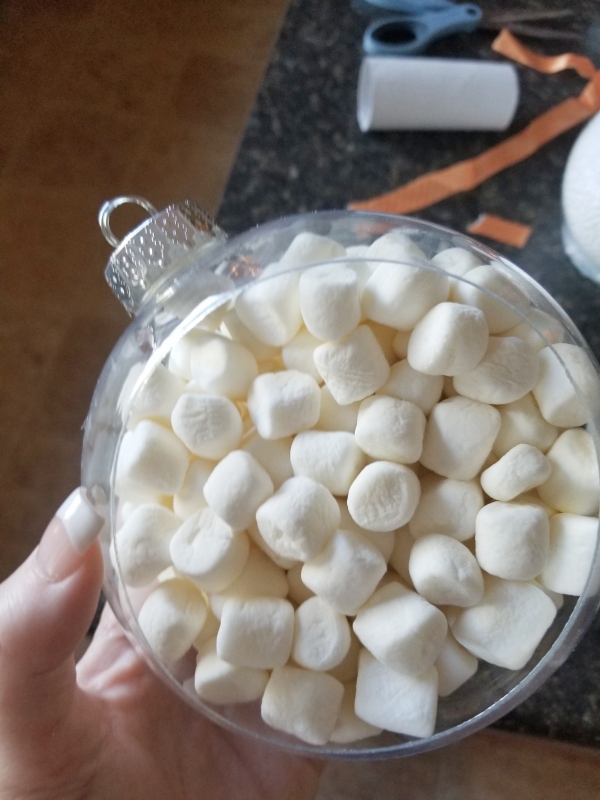 I filled the open ornament with mini marshmallows.

But since it’s open I needed a face that would stay in.

This one from Hobby Lobby is perfect. . 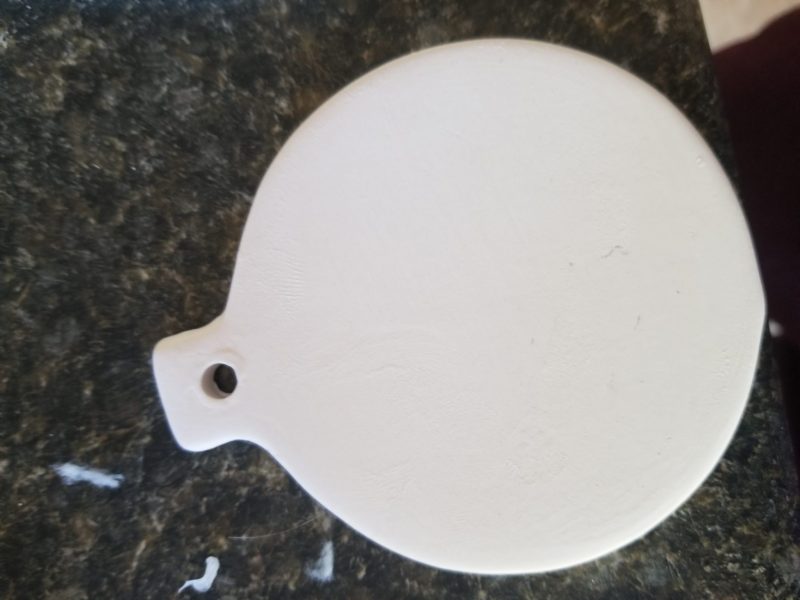 I added buttons and ribbon to create the face. 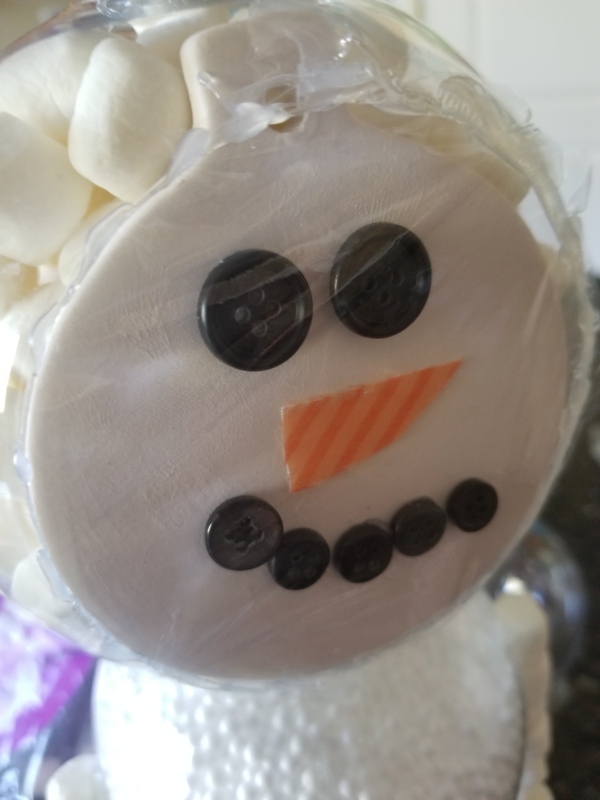 I also took a sandwich baggie and put over his face so it’s like a real helmet. I mean, real as a snowman astronaut can get!

He also needed air pack for his back. So, I took 2 toilet paper rolls and painted them. 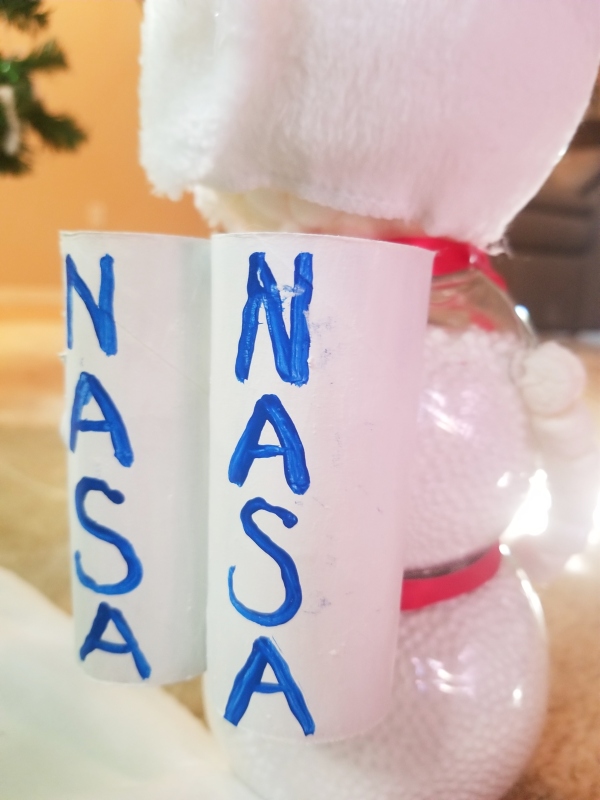 He also needed arms so I used the mini marshmallows and thought they looked like part of the suit. Kind of puffy.

Again as real as a Snowman Astronaut can be! 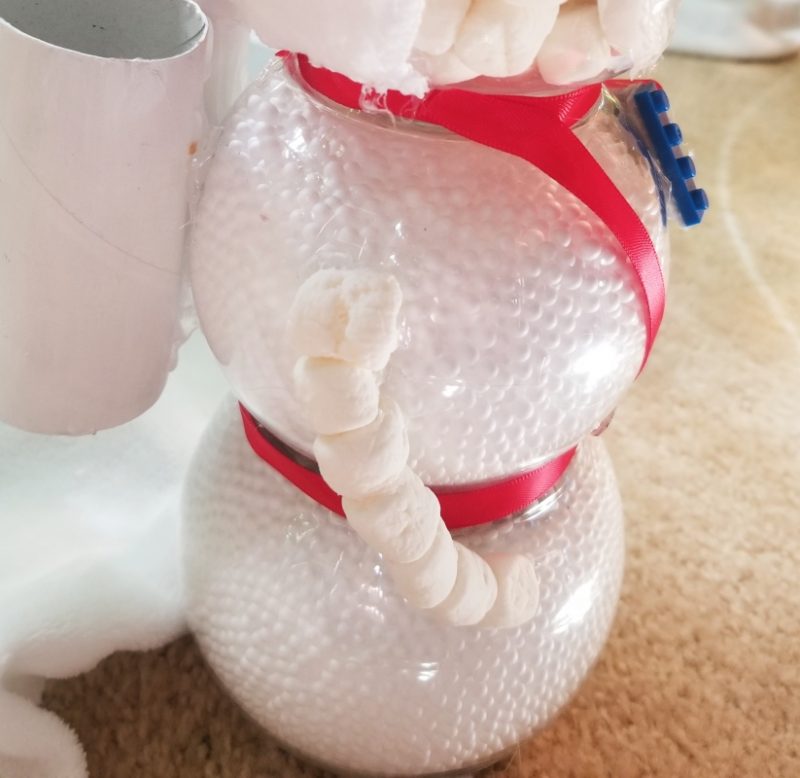 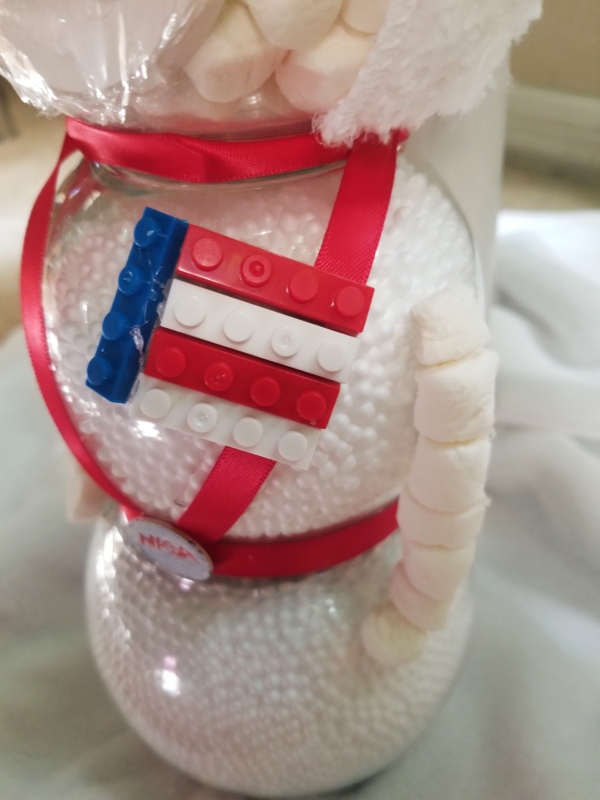 Every astronaut needs a flag to wear. I had some mini lego’s from The Dollar Tree and glued them together on felt. Then cut it out and glued on snowman. I knew I would use those Lego’s one day! 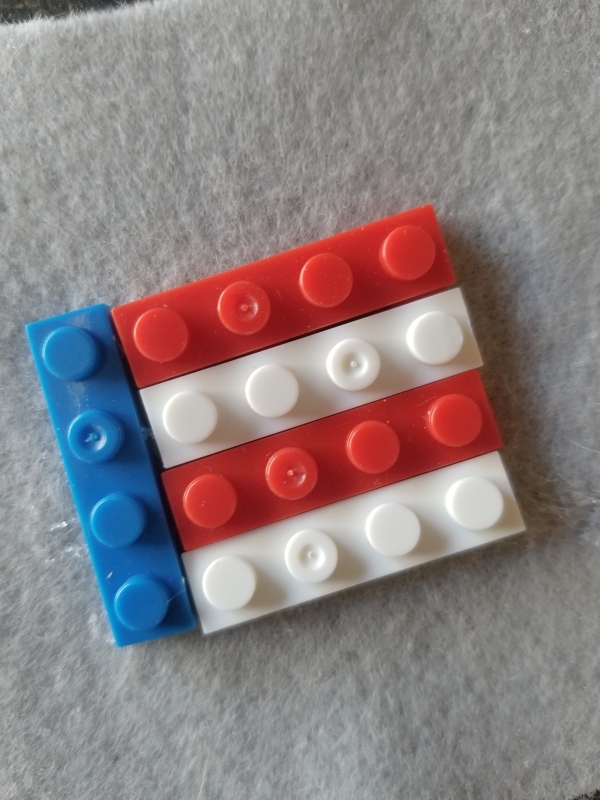 For the helmet I used automotive cloths from The Dollar Tree. It is kind of a fuzzy soft cloth. I 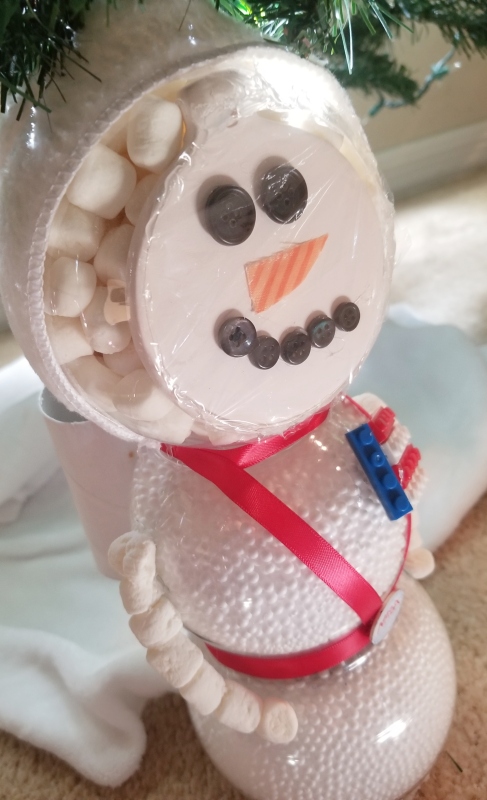 Every Astronaut has to have a NASA patch as well. I took a wood circle and put on his suit. 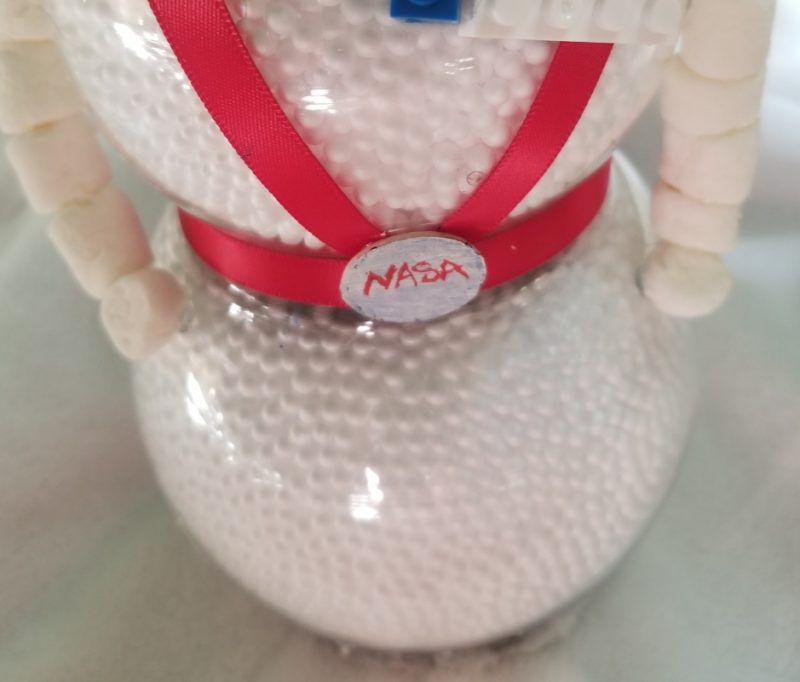 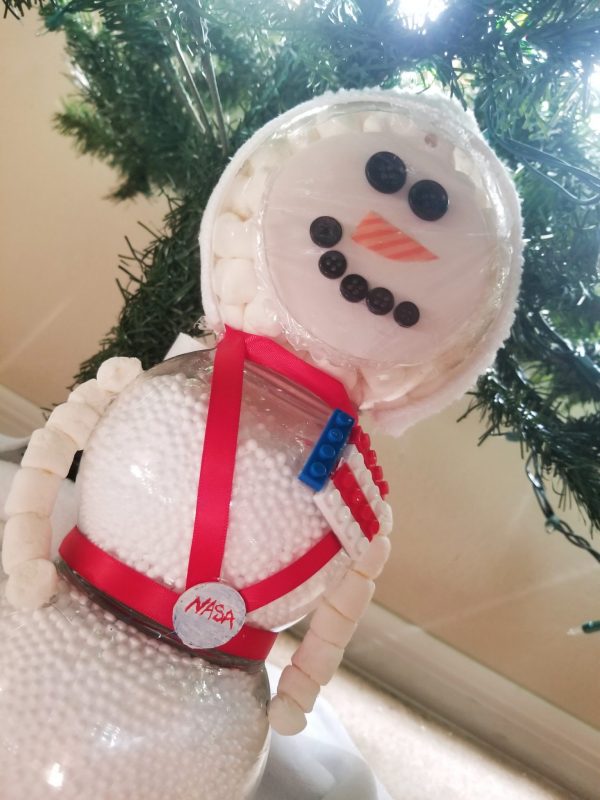 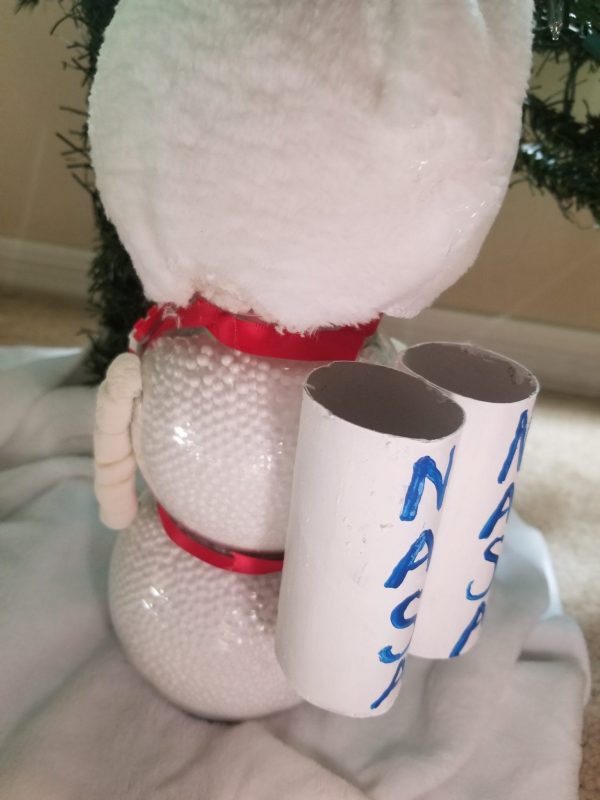 I mean…….. Have you seen a cuter Snowman Astronaut- if such a thing exists!

He is very inexpensive to make when you can get most of the items at The Dollar Store. Get the kids involved too!

So, maybe you never thought you needed a Snowman Astronaut but now you have to create one this Christmas.

It’s one small step for man and one GIANT LEAP for Snowman-kind!

Keep this Christmas crafting cute, keep it easy and keep it UNEXPECTED!

I am a craft lovin', Diet coke drinkin' kind of girl! I love glitter and anything leopard print. My passions are crafting, fitness and living a healthy lifestyle and of course my family. The CSI Project believes in the mission to Create, Share and Inspire. When you create and share, you are sure to inspire! Hope you come away from The CSI Project inspired and come back anytime!!!

When decorating for spring and Easter, try to create or buy decor that can work for both. For Spring and Easter, carrots are perfect! Using Dollar Tree foam wreath forms and a little ribbon and...

Holiday decor doesn't have to take a lot of time to create or be expensive. Using a flower pot and round tupperware from The Dollar Tree along with some embellishments such as ribbon, St. Patrick's...